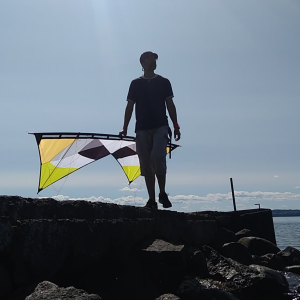 All Kinds of Stuff

All Kinds of Stuff

A beautiful October day, sunny, good winds and the opportunity to spend several hours on the flying field!

No complaints while leaving the house with a couple of kite bags in the car and several hours on my hands. Me, my kites and the wind. Not a bad way of killing a Friday!

Today my plan was to continue ‘sketching’ on my solo ballet quad routine. I have already prepared an intro but I need more to work with. So I turned on the music, plugged in the ear phones and got going.

With the piece of music on repeat, I started the creative process. I had a few ideas in my head and tried them out in the air. Some worked, some did after a bit of tweaking while some didn’t work at all.

Slowly but surely a few bits and pieces came together and can be considered parts of a routine that’s far from finished, but, definitely coming along. 👍

After a while I wanted to do something else so I changed the music and hit my “All Funked Up” playlist on Spotify. Inspired by the funky music I entered improvisation-mode and pulled off several multiple axels! 😛

With the A-Quad those are easy peasy! Set the kite up correctly and whip the break line to initiate the rotation. (Some times you have to move forward to) give enough slack in your lines to allow the kite to rotate all the way around. And then you pop that brake line once again to do another axel.

You can pull off a whole bunch of them just by giving the right amount of slack and whip that break line for a new rotation.

I find the pop to be pretty similar to the pop you do when backspinning a dually. Even the feel of the kite in the air is similar. And … It looks great!

Into experiment mode now…. How about cascading this kite? It should be possible…? Let’s try!

It was more than possible, it was not difficult at all. Starting off like you are to pop an axel. Get the kite in position and pop. Let the kite rotate almost all the way, but before the rotation is fully completed, pop the other break line to kill the first rotation and initiate another in the other direction.

I was experimenting with varying the force of the pops to see what happened. Less force and the cascades tended to be flatter and – off course – slower. Using more force made rotations faster and not so flat, and … Wow! Rising! Rising cascades with a quad kite! Now that’s cool! Repeatable too!

The only downside was that I didn’t bring the tripod so no video to prove it, but hey, you trust me, don’t you?! 😉